Posted at 06:35h in Environment, Technology by Green Gold 0 Comments 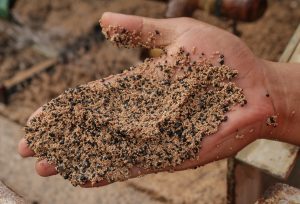 Cyanide was first used in the 19th Century and has not been replaced in the 21st Century. More than 50 years ago, resin was proposed as an adsorbent to reduce free and metal complexed cyanides from
gold plant tailings.

The author of this paper has been involved in the development of the resin technology for the last 30 years, initially with the Vitrokele process. This is a classic case of the challenges of technology commercialization. The answer has been persistence.

A serious attempt at commercialization of a resin based system was undertaken by Tallon and Signet Engineering in the 80’s and early 90’s. The technology, known as Vitrokele, was focused on the replacement of carbon for metal recovery.

A major effort was applied to continuous piloting of the technology at mine site locations in Australia and Canada.  The results gave confidence in the process and chemistry prior to commercial application.

A total of four commercial applications were constructed over a five year period:

These factors, combined with the untimely passing of two of the main protagonists of the technology, resulted in the Vitrokele technology being abandoned.

For the past 15 years, other research groups have persisted with resin based variants of the Vitrokele process, but no commercial process has eventuated. There has been a similar focus on finding alternatives to cyanide, in the hope they will be more environmentally acceptable.  Again nothing has emerged as a serious contender.

So what is the answer?

Simply accept cyanide as the superior solvent and address the concerns: Hence, the RECYN process.